Why might avoiding risk be costing you more than you think? 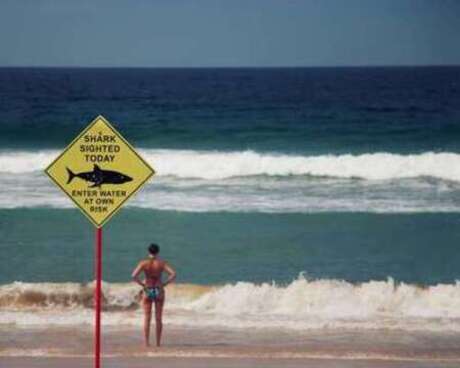 Investing
View all blogs
The image below is the cover-art for a recent edition of Larry Niven’s classic 1970s sci-fi novel, Ringworld. The novel is primarily remembered today for being one of the first to zero-in on climate change as an emergent threat to civilization, but Ringworld also has some interesting points to make about risk and its role in our lives and our decision-making.

Cutting a long story short, the novel centers on a race of profoundly risk-averse aliens called the Puppeteers. Such is their aversion to all forms of risk, they have developed advanced technology to deal with all manner of imagined future problems – for example, that their sun will one day expand to such an extent that it will immolate all life on their planet. Accordingly, when they discover that a far-off world will in the very distant future collide with their own, the Puppeteers go to extreme and increasingly absurd lengths to mitigate this risk, with the ‘cures’ becoming progressively worse than the distant and possibly imaginary ‘disease’.

This article will explore the issue of risk-aversion in terms of investment decisions. Specifically, it will cover what is risk-aversion; why is it sometimes a useful device; and why can it sometimes preclude us from taking great opportunities?

WHAT IS RISK?
The problem of value and how it should be measured has been the core question economists have tried to answer for the past two centuries. Numerous theories have been proposed, defended and denounced over the decades, and the topic is still widely contested to this day. Although the average private investor has much more practical questions on their mind – for instance, how best to put my savings to work, or what sort of return on investment should I aim for if I want to retire by age x? – the issue of valuation is never far beneath the surface.
In the case of property investment, the issue of correct valuation is obviously hugely important. While few would doubt that UK residential and commercial property values have a strong built-in tendency to rise over time, secondary questions like by how much and over what sort of time-frame have less clear-cut answers.
Risk, when used in a financial context, refers to the fact that outcomes can differ from what was expected or anticipated at the start. Risk therefore includes the possibility of investment returns being greater than anticipated, or accruing significantly faster, and it also includes the possibility of losing some or all of an original investment. Accordingly, every investment in any type of financial asset carries with it some level of risk, and there is a well-proven correlation between risk and reward. Unfortunately and inevitably, there can be no reward without accepting at least some risk.
In numerical terms, risk is usually assessed by considering historical trends and looking at comparable investments or markets, and today the quantitative study of risk is a highly sophisticated field of mathematical enquiry. However, for the same reason that economists have been unable to find a definitive singular theory of value, there is not now and probably never will be a single unified and unquestioned theory of risk.

WHAT IS RISK-AVERSION?
A recurring theme in surveys and interviews with private investors is that they have a tendency to over-value certainty. This might sound like an unfair judgement – after all, certainty can hardly be a bad thing – but if the preference for certainty comes at the expense of reasonable returns on investments, then this position starts to appear sub-optimal.
As a thought experiment, ask yourself the following question: would you be happy with a guaranteed but small investment return, say in the region of 1-2%, with a very low probability of your investment falling in value? Or, would you prefer an investment which could return up to 15% over several years, or 10% or 5% under less favorable conditions, but this return would not be guaranteed, and it’s possible that the value of your investment might fall if you withdrew your money within one year?
If you answered that you preferred the first hypothetical option, then you could fairly be described as a risk-averse investor. You prefer the guaranteed small returns that come from investing in safe assets like government bonds, and are happy to forgo the possibility of greater gains. This is a highly respectable position, albeit one which has become less common in an era of ultra-low interest rates, meaning the yield on government bonds has fallen well behind inflation.
ONCE BITTEN, TWICE SHY?
There are private investors out there who may have taken a chance on a stock in the past, perhaps on the recommendation of a friend or colleague, and subsequently been disappointed to see their original investment decline in value. Maybe, having seen their original investment fall by, say, 10%, 20% or even 30%, they may have made the decision to sell and cut their losses. Such an experience could easily make an individual cautious to set foot into the markets again, and this is a very understandable reaction.
However, the response described above could said to bear some resemblance to the extreme risk-aversion displayed by the Puppeteers in Larry Niven’s Ringworld. To unpack this claim a little further, it is worth taking a look at the FTSE 100, the index comprised of the 100 largest UK publicly-traded companies. Over any given time frame, this widely-followed index moves through cycles of expansion and contraction, rising and falling as the prices of the 100 shares contained within it oscillate.
As seen in the graph below, for example, is the performance of the index over the course of September. 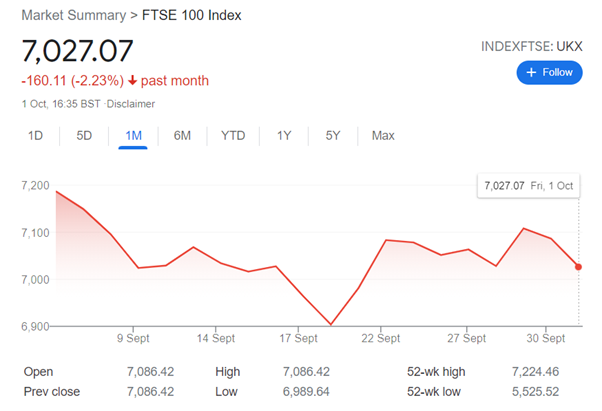 Over this past month, the index saw a decline of 2.23%, and at one point around the middle of the month it was down nearly 4% from where it had been at the start of the month. For the risk-adverse investor, the FTSE 100 might therefore look like too much of a gamble, too much of a risky helter-skelter ride to place their hard-earned savings at the mercy of.
However, this evaluation would be faulty and would misunderstand the nature of what investing over time is all about. As research by IG stockbrokers has shown, from its inception in 1984 until 2019, the FTSE 100 has actually returned an average annualized total return (that is, included dividends) of closer to 7.8%. The essential point is that at any given time, the value of an investment can be going up down, or side-ways, but this does not change the fact that solid, well-researched and well-managed investments based on good fundamentals stand an extremely good chance of rising in value over time, and the volatility witnessed in the short-term very often tends to ‘come out in the wash’ when looked at over a longer time horizon.
As such, an investor who reacts to a short-term or one-off loss by withdrawing all their money from their investments will have removed the risk of volatility, but they will have lost the chance for their money to grow over time.

WHAT IS AND ISN’T RISK AVERSION GOOD FOR?
Risk-aversion is a very natural feeling, and almost all investors have concerns along these lines at least some of the time. To the extent that risk-aversion can act as a check-and-balance on our more emotional and instinctual decision-making habits, risk-aversion is in fact an essential tool in the private investor’s armory. Speedy or poorly considered decisions are almost always bad, and this is where risk-aversion can play a very helpful role by prompting us to check and re-check our decisions before we commit our capital.
However, risk-aversion taken to the extreme will condemn an investor to the mediocre returns available on government bonds, thus inflicting on them a real-terms loss when inflation is factored in. As such, the question is really how to get the right balance between the desire to safeguard our capital as much as possible, whilst also being open to and critically considering investment propositions that can entail a higher level of risk.
The best use of risk-aversion can therefore be as a mindset to generate critical questions to put to any investment proposal. This is why Shojin encourage and welcome direct enquiries from potential investors, be they seasoned investment professionals, or skeptical newcomers to the world of property investment. Risk-aversion is a good starting place; any investment company not willing or able to convince you of the virtue of their approach aren’t worth their salt.

SHOJIN PROPERTY PARTNERS: A RISK WORTH TAKING?
In terms of demonstrating to potential investors of the merits of Shojin’s approach to property investing, one of the most important facts to cite is the FCA-regulated status Shojin has achieved. This means that Shojin meets the very strict eligibility criteria imposed by the FCA on financial companies in order to protect consumer interests.
Equally important as having FCA-regulated status is the fact Shojin always invest their own money into any new project. Shojin bear the risks of new residential and commercial developments directly, and thus any project proposed to outside investors has the full confidence of Shojin’s team of property and investment experts.
Finally, not only does Shojin’s successful track record speak for itself, but the long-term reliability of UK property as an investment is also important to take into account. For these reasons, Shojin are always interested to hear from investors who might have some doubts about whether property investment is the right path for them. Risk-aversion is a natural and instinctive response to uncertainty; learning when it is and isn’t the most useful response to much harder, but it has to begin with conversations and questions.
For more information about Shojin’s unique approach to property investment please go ahead and contact us via any of the following channels.

REFERENCES
(i) https://www.shojin.co.uk/news/what-does-inflation-mean-for-uk-real-estate-invest
(ii) https://www.ig.com/uk/trading-strategies/what-are-the-average-returns-of-the-ftse-100--200529
Shojin Property Partners uses cookies to give you the best online experience. By continuing to use this site, you agree to our use of cookies.
Cookie Settings