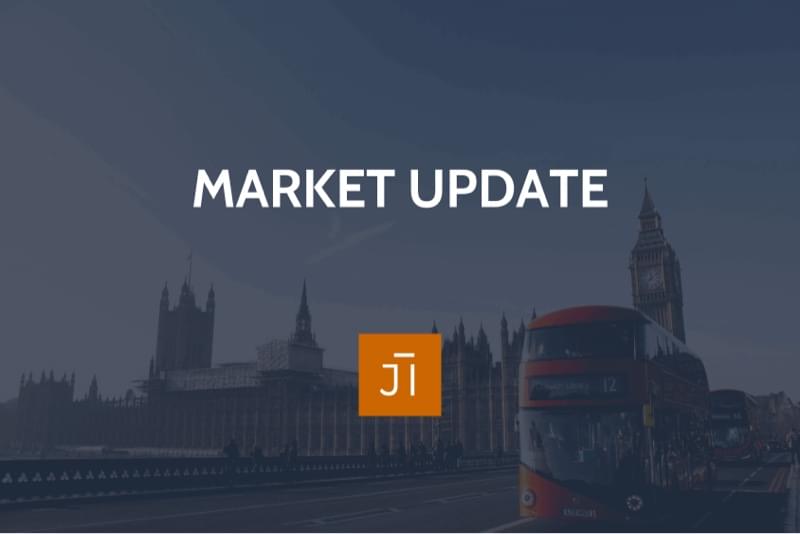 Property Market
View all blogs
Our first market update was circulated a few weeks after lockdown commenced. Towards the beginning of lockdown, it was too early to understand the economic impact of Covid-19. However, it is becoming evident that the short-term economic impacts are greater than originally anticipated as the UK economy shrunk by a record 20% in April 2020[i]. Although it is still too early to speak of recovery, as there are indeed time lags between the impacts felt by the wider economy and the property market, the medium-term picture is becoming clearer, and in many respects, more positive.
The Government has since allowed various markets across the UK to open, including much of the property market. Utilising the same format, we analyse research published by industry leaders to review the forecasted short- and long-term impact that Covid-19 may have on the UK property market.

If you would like to review our original in-depth market insight which was circulated in April, please click here.

Transactions
Over the past couple of months, the UK property market has effectively been in lockdown. Activity was severely suppressed and plummeted as a result, which was widely expected by many. According to Savills, HMRC data suggests that there “were just 38,000 transactions in April, -55% below the five-year average” with many exchanges having occurred prior to lockdown[ii]. Transactions fell with such significance, that for the first time ever, Rightmove announced that in April 2020 it was unable to produce its regular monthly report on trends across London and the UK[iii].
However, since the wider property market reopened and estate agents have gone back to work, there has been a temporary increase in the number of transactions. Pent-up demand resulting from years of uncertainty caused by Brexit, coupled with the movement restrictions imposed as a result of Covid-19, has resulted in an increase in transactions, beyond the bounce that was felt at the beginning of the year(commonly referred to as the ‘Boris Bounce’), which is highlighted within Figure 1.

Savills predict that activity should recover gradually until the end of the year, although remain lower than the five-year average. Transactions should return to normal levels by 2021 Q3 as pent-up demand incurred over recent years, which was exacerbated during lockdown, is slowly released.

Property Prices
At the beginning of lockdown, Savills predicted that UK house prices would fall by 5%-10% during 2020. Since their initial report, Savills still stick by their predictions and have refined their estimate to an average reduction of 7.5%[iv]. Similarly, Knight Frank forecast a decline of 7% across the UK and a lower of 5% in prime London[v]. Over the coming months, prices should go through a period of discovery and correct. The overall short-term impact will largely be dictated by how lenders approach the minimisation of forced sales, to what extent borrowers’ incomes will be hit and how far real incomes will fall[vi].
However, a decline in prices should be insulated by low new-build rates, low existing inventory and low interest rates as this will likely fuel demand for available stock. The imbalance between demand and supply will be further enhanced as construction is relatively inflexible and unable to accommodate an increase in demand within the short-medium term, which is especially paramount as the number of new developments undertaken in 2020 is likely to be lower than average.

As a result, leading agents agree that the negative impact to UK house prices should be short lived and there will be a strong rebound, with house prices increasing by 5%-8% next year.

Summary
Overall, the residential market remains resilient. Much of the long-term impact will be dictated by how long the pandemic lasts. In addition, the residential sector is increasingly prone to political interventions[vii], as if the government continue to stand behind the public, it will reduce the struggle to meet mortgage and rent payments.

The spread of COVID-19 has also caused individuals to rethink their living requirements and will subsequently influence the locations and types of properties they choose to acquire and live in. A RICS survey undertaken in May suggested that more than 80% of participants desired homes with gardens or balconies and 58% felt that properties located in highly urban areas will be less enticing[viii] which could lead to strengthen the trend of outer city living and commuter hubs.
PURPOSE BUILT STUDENT ACCOMMODATION (“PBSA”)

Historically, PBSA has been a defensive sector of the market. However, the sector has experienced unprecedented disruption as government-imposed restrictions have led to the temporary suspension of university lectures, resulting in many domestic and overseas students leaving their accommodation. As a result, many student housing operators have chosen to suspend rental collections and their income has fallen.

There is also uncertainty as to how the crisis will affect the number of students coming to the UK to study which may lead to operators receiving lower than expected incomes for the next academic cycle.

Industry stakeholders are highlighting the need to reform to the current regulations and planning impositions on PBSA. As outlined by the BPF, there is a requirement for planning flexibility, as although PBSA should provide accommodation to students, they are calling for local authorities to allow for operators to utilise unoccupied rooms for a range of occupiers, such as key workers, which could help supplement lost income for operators. In addition, issues such as council tax on empty units could increase the operational costs, which is of further detriment to PBSA operators[ix] in the short term.
Domestic demand is likely to hold up over the next academic cycle which should sustain a minimal occupancy level across accommodation that are not specifically designed for overseas students. In addition, as confidence is restored, Knight Frank highlight a survey undertaken by the British Council and UCAS outlining that just 16% of prospective undergraduate students from China are likely to cancel or delay their study plans, as seen in Figure 3 on the next page. As Chinese students make up 18% of all international applicants, this provides a level of comfort[x]. 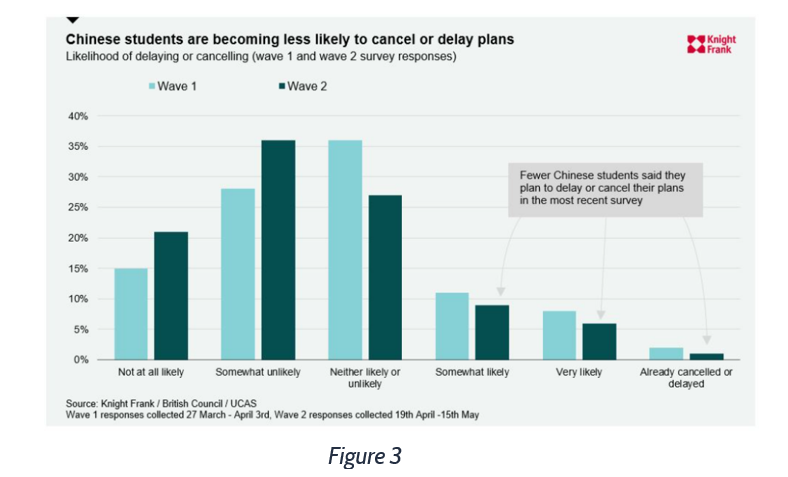 Offices have begun to reopen and people are going back to work, but the consensus amongst many is that the way we work will change for the foreseeable future, and so too will the workspace with it.

There is a question mark over the ability of offices and office providers to re-accommodate workforces given the new social distancing norms imposed across the country. According to Knight Frank’s estimates, approximately 135 ft2 is required per desk to maintain social distancing measures[xi]. Based upon current availability of stock, there is still a significant undersupply of suitable office space which will likely fuel the demand for flexible workspace as a short term stop gap solution. However, transactions for new leases and investment volumes into the commercial market has fallen as many take a wait and see approach[xii].
Even after restrictions are lifted, the return to work will not mean a return to normal. Occupancies will likely run below capacity to adhere to potentially new health and safety measures, which could change the relationship between tenants and landlords. An increase in the number of employees working from home will also drive behavioural changes within businesses and the office space they choose to occupy. In addition, it will likely drive innovation forcing companies to digitise and adopt technology in order to move forward.

Future suppliers of office space will have to rethink the design and layout of new spaces in order to easily accommodate social distancing measures and ensure their workspace is kept safe and hygienic, and their work force healthy. Materials such as brass and copper could be more commonplace in future workplaces to limit the spread of bacteria.

In summary, there is still an undersupply of suitable office space, specifically in London, to accommodate the existing needs of businesses and their employees. Many workspaces will need to be adapted and the design and layouts of spaces that are to be delivered in the near future need to be revisited. Although there likely to be a change in behaviour with flexible working and an increase in those that work from home, the demand for suitable workspace should continue over the medium-long term.
RETAIL

As highlighted by many, the outlook for the retail market prior to COVID-19 was already bleak. The general consensus is that the recent pandemic will permanently fuel the structural changes and shifts that have previously existed within the sector.

Retailers have suffered from a drastic decline in revenues. Over the past few month’s footfall has massively fallen, and in the week to 23rd May 2020, a decline of 71.9% on a year-on-year basis was recorded[xiii]. This has severely impacted the ability for retailers to generate revenues and keep up with costs. There is also uncertainty as to how quickly footfall will return despite shops and retailers opening.
Retailers who do not benefit from an existing online infrastructure have suffered drastically as a result of the shift in online consumer spending. Online sales prior to Covid-19 accounted for 19% of retail sales, increasing to 40% during Covid-19 – a shift that might have taken years has occurred in a matter of weeks[xiv].
Since our last update, shops that can comply with social distancing measures have begun to open, although many are choosing to open in a slow and steady approach in order to increase the chances of staying open and generating revenues. Although this provides certain businesses with a breath of fresh air, it is likely to be temporary as consumer behaviour may cause short and medium term impacts due to the existing restrictions in place.

The change in consumer habits, notably the increase in online spending, has caused somewhat of a gold rush in recent years for the logistics and warehousing sector which has largely been driven by the changing demands of retailers. In addition, although high streets and shopping centres will suffer, retail warehouse parks may benefit from the recently adopted click and collect and also double up as short term warehousing space for last-mile distribution due to its close proximity to urban locations[xv].
The changes in consumer habits will likely impact and change the relationship that occupiers have with landlords. According to a recent survey, 79% of property owners through the UK, who own in excess of 120 million sqft of retail believe that Covid-19 will permanently change the way in which retail property is leased[xvi] and how the asking rent is calculated.
In summary, retail will take longer than other sectors to recover and there will be various pinch points throughout this recovery. Although retail sales contribute to a significant portion of GDP, and will likely do so for the foreseeable future, Covid-19 has accelerated structural shifts which will cause various businesses to innovate. In the process, there will likely be a ripple effect to other sectors within the UK property market.